The earthquakes at False Pass Alaska in 2016 reveal some very interesting things.  It is hard for me to be quiet about all the findings I see.  This testimony is happening in our life time and patterns other messages from Scripture.  It is so in our faces that it will be incorporated into the book, ‘The Umbilical Cords of Noach’ that is in progress.

As you begin to understand the Hebrew months and the circular flow that they have, you will become just as excited as I am.  I’ll try to take this slow.  Let us look at the dates first and then we’ll go down through their  Hebrew calendar significance.

I can see that there will be a second article written to summarize all of the 3.5+ False Pass earthquakes.  This article will cover only the 4.0+ at False Pass Alaska January to September 2016.

If someone would put statistics to this and see what the possibilities are of these earthquakes happening on these Hebrew happenings, I think we would stand in amazement at the yud (hand) of God.  I believe our Creator sends us messages if we’re watching.

Some may say there is a one in seven chance in a week of an earthquake landing on a Sabbath/Saturday.  In these eight 4.0+ False Pass earthquakes there are TWO direct Sabbath.  The studies issued to them are entitled; ‘When you set up’ and ‘When you come in.’

I am going to give you the theme of each of the earthquakes and then we’ll talk about them.

January 26 2016, Shevat 1 – Zechariah 1:7 – The horsemen have wandered the earth; find peace, and then crafty ‘artisans’ are sent to remove man’s peace.  Those that hurt Israel are to be judged.

April 14 2016, Nissan 6 – Is the day before Lazarus is raised by Yeshua Jesus. False Pass earthquake at 13:52:52 UTC does make this close to dusk thus the next day in Israel is about to begin.  But it is still Nissan 6…the day before Lazarus is raised.  Lazarus  was four days in the grave thus Lazarus’ death is calculated to Nissan 3.  Lazarus’ resurrection pictures Yeshua Jesus’ resurrection of whom raises ten days later on Nissan 17, Feast of Unleavened Bread.

June 15 2016, Sivan 9 – People of Israel accept Torah..in desert with Mosche.  (SHAVUOT calculates to this time period and /or Sivan 6).  Shavuot is seen in desert with Mosche and again in Jerusalem at 50th day of counting of the Omer.)   This giving of the Ruach HaChodesh (Holy Spirit) is seen in both places…thus having ‘assembly’ (church) start at Mt. Sinai.

July 27 2016, Tammuz 21 – The Fast of Tammuz 17 was established as a result  of false worship.  Mosche had the gold removed and put in the streams.  The Israelites drank the poisoned water and die.  Plague of False Worship.

August 14 2016, Av 10 – Fast of 9th of AV moved to this day, Sunday…as you never ‘fast’ on the Sabbath.   A False Pass earthquake occurs on a false Ninth of Av Fast.  Wow…amazing…  Did God just indicate that this fast was now turned to a good day?  It is said that in the end days the fasts will become feasts.

September 23 2016, Elul 21 – Sabbath Ki Tavo (when you come in).  Elul is known as the month the king comes closer to his subjects.   Is our king observing those that made Elul 21 The Lord’s Feast of Tabernacles?  It was a False Passover because men went against the Sanhedrin, Hillel’s calendar.  A False Passover on March 23 2016 sets the stage for this False Feast of Tabernacles, September 16-24, 2016.  Even, both of these exact dates (16, 24) had False Pass Alaska earthquakes.

Two of the eight False Pass earthquakes occur on the days that started the falseness and celebrated the false fall festival.  Again,,,,amazing….and both the first and last held small eclipses on them….not TOTAL…but small and dark/false days.

And, what are the chances of ַַjust one of these landing on something that happens once a year…  Wouldn’t that be a 1 in 365 chance of happening?  The entire ‘eight’ 4.0+ earthquakes show us a message.

This message is to the groups around the world that do not like rabbinic standards.

If groups with good intentions choose to go off the Hillel calendar, it causes their other dates to be off as well.  I’m not sure how they ever catch up.  They will always honor Rosh Hoshanna, Yom Kippur and then the Feast of Tabernacles on a different day than what the Hillel calendar had set.

These eight earthquakes are harbingers to stop ‘false worship.’  Because the ‘false dates’ held eclipses on them does not confirm their correctness, but to their falseness.  Eclipses are negative and these eclipses were so small that they were barely noticed in any part of the world and were slight where they were seen.

Men study the scriptures and ‘replace’ God’s calendar that he sanctioned from Israel.  To make a decision not to honor the first Adar in 2016 has caused their entire future to be off.  They expect Adonai to show up when ‘they’ decide He should show up.

Hillel’s calendar adds 30 days every two to three years.  Blogs, articles and books have been written to show evidence why man can not just go about doing his own thing on the earth….and NOW ladies and gentlemen…even though we can all live together in LOVE with  ‘this too shall pass’….God did NOT let it pass…as even Nadab and Abihu were consumed by fire for ‘false’ worship.   They also wanted God to show up on a different day.

Our Creator reacts through His creation.

Are these earthquakes because of False Worship on the earth?

We can see that this Alaska report had 1078 earthquakes.  I chose only those at False Pass Alaska.  Out of all these earthquakes there are only EIGHT…a very small number.  And now, for the surprise that shows our Creator speaking through them…. 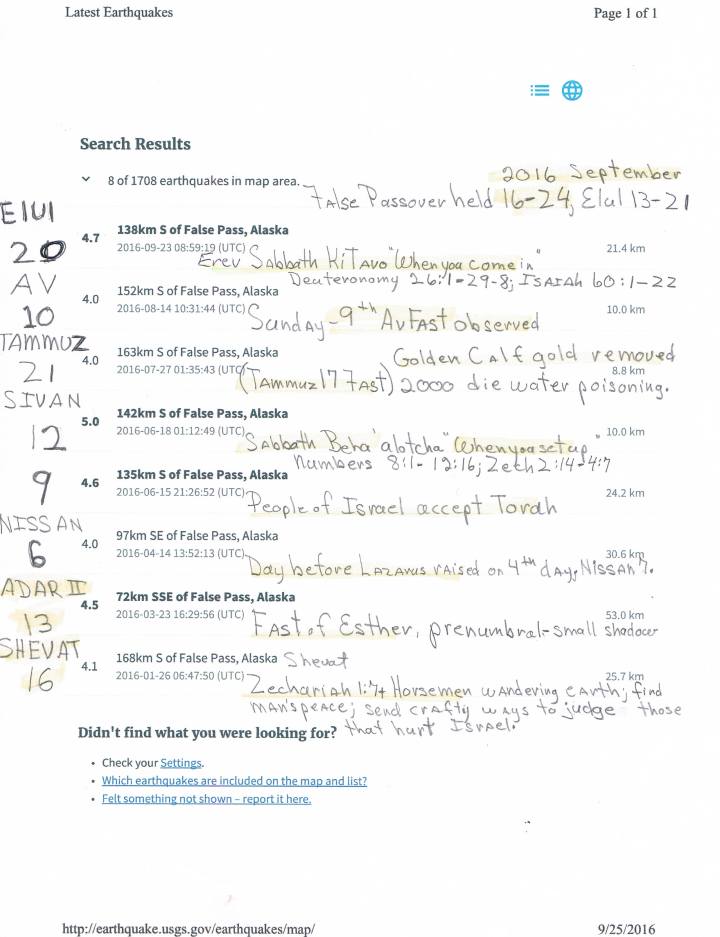 We start at the bottom to show the beginning intent of these ‘False Worship’ earthquakes only occurring at False Pass Alaska.

TASTING OF THE TREE

There are four ‘new years’ to the Jewish calendar.  This Tu Bishvat has to do with the earth and the trees.  It is when the trees begin to form and the sap within the trees rises.  It is considered a harbinger of spring.  This first earthquake on this day is also a ‘harbinger’ of Passover and the Feast of Tabernacles.

As I read information about Tu Bishvat in The Jewish Holidays by Michael Strasfeld, this day has tremendous deeper meaning besides spiritual meanings of being fruitful.  The Jews are not just a group living in a land, but they are a community; a nation.  They have a land that they are aware is always beneath their feet.  They grow things and they also are to grow the nations into come into Torah, the instructions that came via Mosche from God.

This 4.1 False Pass earthquake is one day after this great celebration of a new year of the Jews being as trees sprouting up all over the earth but based in their land as they are fruit.  This celebration connects to Passover and some even have a ‘Seder’ drinking four cups of the fruit of the vine in celebration of it.  Passover connects to Sukkot known also as The Fast of Tabernacles where the Messiach tabernacles with man on earth.

This people group known as Israel can not have their calendar changed, nor any of their ‘new year’ celebrations.  Each ‘new year’ connects to the next and become circular in thinking as the world grows like fruit toward The Creator in His purpose of making the earth his footstool and Jerusalem where The King resides.

The first False Pass Alaska earthquake is in memory of Tu Bishvat (Shevat), but it is also the next day.  Our Creator will shake the earth to hold things to His pattern and when men do not even know to come and celebrate…he shakes it again.

When I think of the month of Shevat I immediately think of Zechariah 1 and we follow the discussion of where have these horsemen been.  On Shevat 16 they would be looking to see what kind of peace there was on the earth.   Chapter one opens up on Shevat 24 being the day of the report given.  It was man’s peace and not God’s peace that was on the earth.  We continue to see that different artisans are then sent out to remove ‘man’s peace’.  It is my belief that earthquakes, tornadoes, hurricanes and the such as just one of the crafty ways to bring man to their knees to re-consider to whom they give thanks for all the fruits of their life.

The month of Sivan is when Yeshua Jesus is still on the earth for forty days instructing in the Torah.  The second sabbath ‘False Pass’ earthquake is in the month of Elul, known as the month that The King is in the Field.  He is coming to know his sheep and people need to draw near to recognize him.  The Sabbath reading on Elul 21 (9.23.2016) is ‘When you come in.’

There is a third ‘False Pass’ earthquake that ties into this theme of what men on the earth should be doing.  On June 15 2016 which was Sivan 9, it is labeled, “People of Israel accept Torah.”    These three earthquakes have a theme of accepting Torah which tells them how to set up judges for when they come into the land.  Isn’t it interesting that we are now selecting Presidential candidates and hearing how they will help us.

These scriptures instruct the people on how to live in the land…it’s the base foundation of how to walk out our lives.

This report will be continued as we look at the 3.5+ False Pass earthquakes.  Here they are for your review. 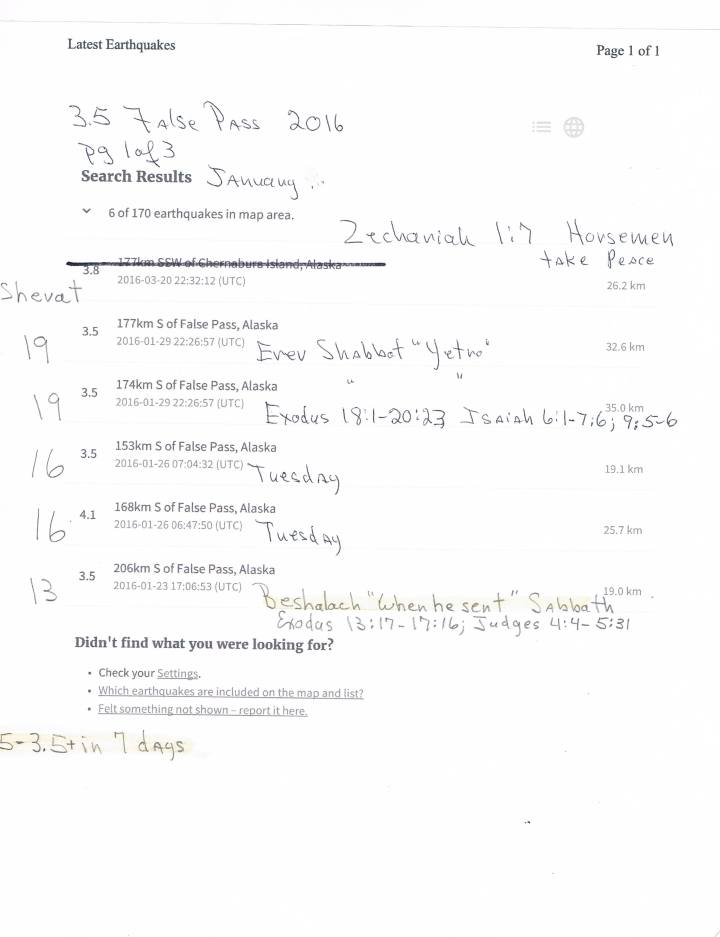 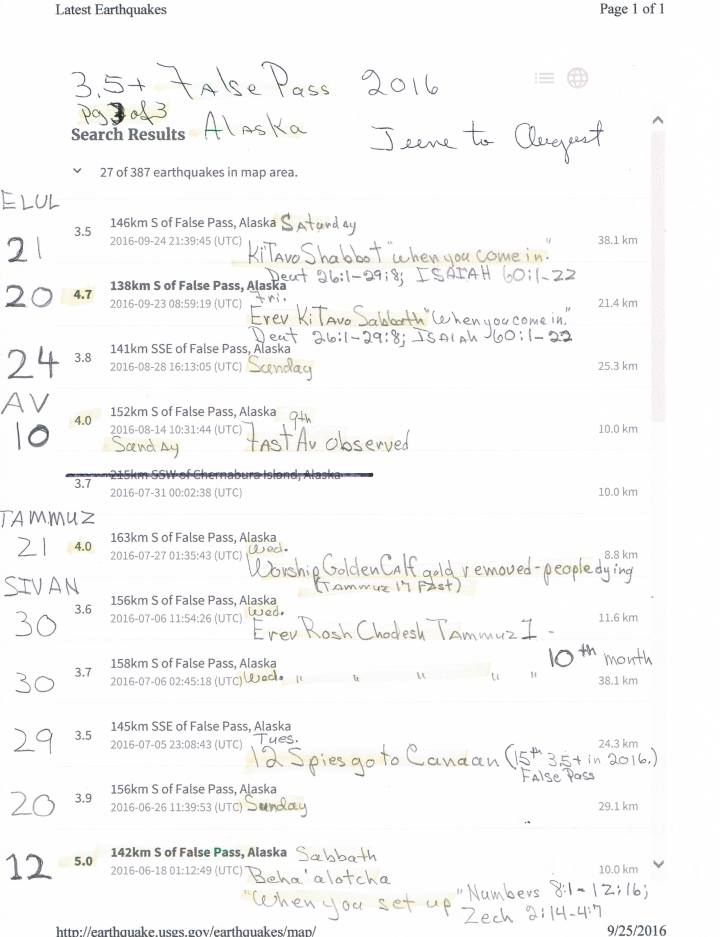