Ten Tribes said, No. Two Tribes said, Yes!  What ambassadors were afraid?  I quote a New York Times article that reads, “Nearly Every Former US Ambassador Disagrees with Trumps Jerusalem Decision.”  In this article they only identify eleven tribes/ambassadors. Thus, we will find Seven said, “no” and Four said, “yes.”  And, if we add a”Yes” vote from our current ambassador, David Friedman, we now have FIVE…Good Ambassadors out of 12!

Chanukah is celebrated in Israel with EXTREME joy in 2017.  President Donald Trump ignored world powers and stood with The Macabeen Family who through several battles cleansed The Temple.  They helped the other Hebrews to bring the presence of God back to the earth.  They had known what His presence felt like and they knew they could not go on without ADONAI amongst them.  He was the spirit of their lives just as Mosch would not go on without His presence with them.  What would that presence be like on our earth?  Incredible…!!!

I  give thanks to two…three…and then I found four.. former United States ambassadors to Israel who said….”Finally, it’s time….the world has always known Jerusalem was the capitol of Israel.”  They are the Joshua and Calebs of our day!  Let us thank these ambassadors of whom have lived in her land… believing Israel to be great on the earth.

The New York Times news article December 7, 2017 states:  “All but two of the 11 former United States ambassadors to Israel contacted by the New York Times after President Trump’s decision to recognize Jerusalem as Israel’s capital thought the plan was wrongheaded, dangerous or deeply flawed.”

“All but 4 of the 11 former US were opposed in some way; 36 percent agreed with President Trump.  42 percent with the current ambassador making twelve (5 of 12)!

Why did they not add our current ambassador to the comments?  New York Times..you are swaying because you don’t want a physical land?

The TRUTH must be told or you become a ‘curse’ on the earth and feel it from The Creator who disciplines his children.  These are numbers of ‘silence.’  There is one-half hour of silence in the heavens…that would be 20.8 years.  One hour of Heaven’s time is 42 years.  Forty-two is also three and half years.  Forty-Two is also 1,260 days..as Daniel speaks about.  Can we make it another 75 days from 1260 which is 1,335 days?  That is the day of blessing that Daniel speaks about.

The Messiach ascension from the earth..did it occur before 35 AD?  Most believe so. I like the year 33-34 AD as it was a Shemittah year and it also aligns with Joseph being a total of 34 years with Jacob in his life-time.  And, Joseph only lived 34 more years after his father Jacob died.

What will 2000 years (40 jubilees; 40 x 50) from 35 AD look like.  Will our King be reigning in 2035 AD?  Where is His Temple that is defiled once again for 1260 days…42 months?  Much to think about…and yet…it is simple…The Temple needs to go up…even if it is just to be defiled…but at least The Nations can come and give tribute and show what side they are on!

Let us challenge the world’s ambassadors come to Jerusalem and support these five.

GIANTS in the Land….but, so was the harvest… Abraham sacked Four Kings of whom just sacked five kings…for a total of 9 kings.  Hmm….just as what the NY Times reported…Nine ambassadors in 2017 say, “No to Jerusalem.”  Abraham with only 318 men brought all the bootee back and returned what the five kings had lost.  He kept the Four kings kingdoms and now we see how he was rich before Isaac was born…to The Creator be given the glory…as He gives everything to us so we can trust Him again in our times of distress….when all looks lost…we need more King Cyrus’ and Esthers and Joshua and Calebs to cross over and draw many to Himself..into Torah.

The 12 spies (one from each tribe) crossed over into the land to check out what ADONAI had prepared for them.  They returned talking about ‘giants/today’s Palestinians’ in the land.  Ten said, No…and Two…said, “Yes…with God…we can do it!

The third positive ambassador I found on the last page of the New York Times news article.

Daniel B. Shapiro – (Obama)  “Jerusalem is Israel’s captial, and it’s appropriate that we recognize it as such,”  he said in a phone interview.  “In that sense, the president’s recognition of reality is fine.”

After summarizing this man’s thoughts I found a fourth ambassador of whom may not exactly have liked how President Trump handled it…but had also encouraged Obama and Bush to do it.  He wanted it done to avoid The Madrid Peace Accord which turned into the Oslo Accord…which started  ISRAEL’S FINAL SOLUTION known as, ‘The Two-State Solution’.  We can see the name stuck, but the idea didn’t work…because they (Ishmael) do NOT want a Jacob renamed to Israel…ever…there is to be no land called, Isra’el…but a return of Philistines…an enemy.

Today’s Palestinians are a group of people denited to return to their country.  Jordians were told to move into Israeli land as a pending war was about to begin.  They are an example of refugees today being told to leave and populate somewhere else in the world since their homes are burnt down and they have no place to return.

When the Jordanians wanted to return after the small shuttlebut…they were refused.  These people were always part of a plan to start a new people group within Israel.  This group would always be controlled by the King of Jordan.   As they populated, they would demand to be their own state.   So, what these ambassadors aren’t admitting is that there is only one state of Israel…and there is no place for a displaced Ishmael.  They serve different gods.  One is Egyptian Hagar and the other Abraham’s Sarah.  The two will live in conflict when not accepting his position in the family.  Therefore, Jordanians will not be happy because their leaders control their lives.  Their leaders do not believe in the God Abraham, Issac and Jacob, but the god of Ishmael….a cast off son via Sarah.  It is the bride Sarah that Abraham was told to listen to.  It is The Bride Israel that the world is to listen to.

I give Mr. Brown a YES credit because I can see he was trying to AVOID the awful..Two-state solution.

(Israel is not a land of two-states…it’s heritage is with the God of Abraham, Isaac and Jacob….not Ishmael…these brothers were told to stay separate…but they could enjoy the blessings of it all given through the God of Abraham, Isaac and Jacob.  This shows us how God wants man to live in peave but through a system that brings forth ‘Life’.  Strife will continue until the brother Ishmael accepts…One Land, One undivided captiol and One Torah…for the land.  Ishmael and Esau must accept the Living God…of whom lives by The Torah..since the time of everyone’s father, Adom.  Adom was the first to have instructions of resting on The Seventh Day/Sabbath; food laws of what food and trees were okay to eat from; human law of not killing each other…etc.

The twelve tribes argued, split and carried off to Babylon and then return as ONE…people…with One God; The Living God who acts on their behalf…and will continue to fight the Ishmael attitude.). Two states is Anti-Christ..it is against the anointing of The Messiach Yeshua Jesus…returning to rule from The Holy City.  His two feet stand claiming the entire City of Peace…His Peace…by Word and sword if necessary.

William Andreas Brown -1988-1992 – (Clinton)  He said he later wrote a memo to President Bush to move The U.S. Embassy but it was dropped.  He commented about Trump: “If he was going to make this announcement, it ought to be very very carefully crafted so as to minimize a blowup.”  he said, making clear he did not think Mr. Trump had succeeded.

Ten said, “NO, and two said, Yes.”  And, because of their lack of faith in God to deliver them, they roamed the wilderness for forty more years.  The parents all died and Mosch waited to grow up a new generation in Torah that would not be afraid.

Moses let them ‘search out the land’ and therefore the great leader Mosche would not cross over, as well.  Mosch’s life was broken down into three segments of 40 years.  Forty years in Egypt, 40 years in Midian and 40 year of teaching Torah in the Wilderness.

We are 40 Jubilees (2000 years) from the time of The Suffering Servant when His bodily temple was destroyed.  Now 40 Jubilees later, we should be preparing to build The Temple so the people can worship correctly with the presence of God on the earth.

This battle is about bringing The Messiach’s return.  Ishmael does not want that return and helped destroy The Temple when Roman soldiers melted the gold off of every stone in 70 AD.  That caused every stone to be overturned as prophesied.

Forty Jubilees later is 2070.  Will we have a Temple to bring the presence of God back upon the earth as well as indwelling men.  It has to have a physical form as well as it already  has a spiritual form.   Or, could it be that when Israel is 70 years old….as it is this year….that The Temple is built?

No wonder the ambassadors are to die off and a new generation of world ambassadors will be installed.  Every nation should move their embassy to Jerusalem…from there they accept the ways of Israel and The God of the Universe.  From there they say on the Day of Atonement, please offer a bull for our nation…we want to be set-apart as The Creator desires and not a we desire.  Nations can now use The City of Peace as a symbol of their heart…they will come and celebrate The Lord’s festivals.

I am going to list those ‘doomed’ tribes that were still afraid when the New York Times called them in December, 2017.   These men still cause the families of the earth to be fearful of entering, ‘The Promised Land.’

Seven severing ambassadors…  They have held back the anointing of the King of Kings. 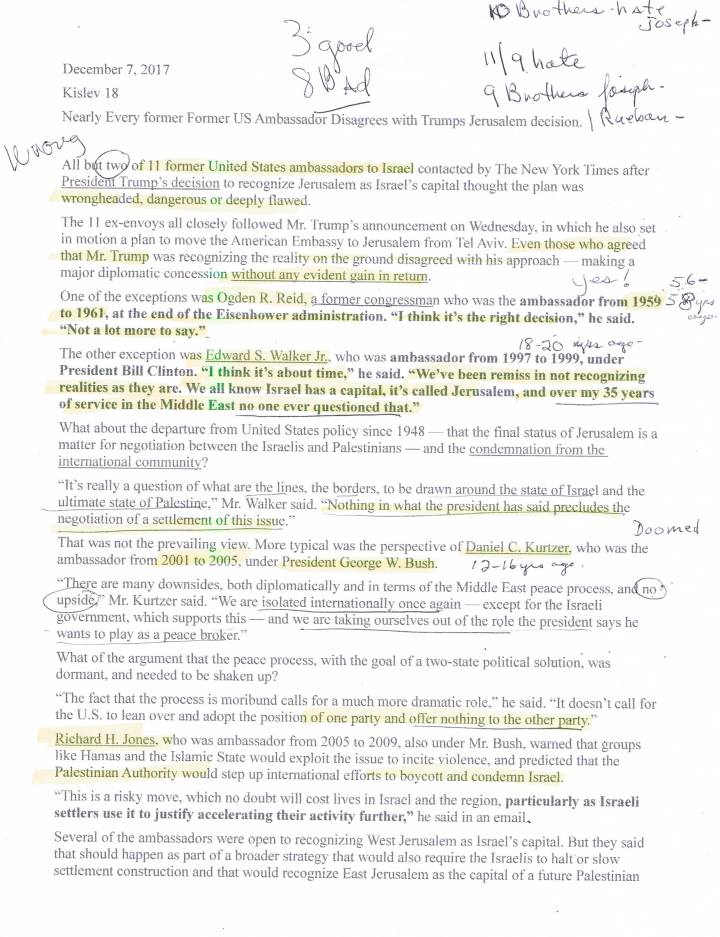