I looked at earthquakes in the United States over 5.0 in magnitude.  Here is the list which gave me some in Canada and Mexico, too.  I’m looking to see if they were affected by eclipses….hmm…we’ll see.

And, what other patterns do you see?

If we start at the top of this list and go down, we see The LORD of Hosts…shaking America on the day that they shook Japan.  The Hebrew Month of AV and day 30 is when the “SECOND” atomic bomb was dropped on Nagasaki.  It killed nearly 70,000 people over time.  I want you to also know that our Creator issued an earthquake at Hiroshima on the  anniversary of Nagasaki this year as well.  By doing that, Adonai recognized both these ‘loss of life’ happenings.  And, Oklahoma and California were given strong quakes of 5.6 (some of their largest) to remind them of AV 30.  Death is horrible but it took another loss of perhaps 150,000 Japanese to stop a war that had surmounted to 50 million lives lost in it.  It was not just Six million Jews of whome were part of a final solution.  Many others were part of Hitler’s ‘final solution’ as well.  God is in memory at it’s 71st Anniversary of ending a 1 Shemittah cycle war (7 years).

Next, we witness on AV 6 the first testing of the atomic bomb being recognized.  There is a definite message here.  It is my understanding that the ‘conservative’ elite of our nation would meet at California locations to decide the things pertaining to the war…even the development and then deployment of the ‘atomic’ bomb.  Today, this ‘secret’ club has been ‘found out’.  It is now with the ‘elitists’ good intentions to ‘save the world’ for a few..that ‘CARE’ is sacrificed there to an ‘owl’ statute which is likened to ‘molek’ sacrifice.

Where was this third earthquake?  Upper Lake, California….YES…near The Bohemia Grove Club…  My Creator never ceases to amaze me.  They decided to develop and drop two bombs from that site and now God gives a larger than normal quake back to them…5.l.  If you can connect Hwy 101 and the Russian River…you have their location of ‘false care’ and ‘Molek’ worship.  If The LORD of Hosts cares, we should care….and exploit their deeds…all in the name of ‘CARE.’

Even the evidence of these earthquakes happening at the Sabbath is amazing.  We can read this message as, “See, I am setting up before you today a blessing and a curse.”  And, that is exactly what the atomic bombs were…they were a curse that so many died and yet a blessing to stop warring nations.

With only EIGHT (new beginnings) earthquakes, it is amazing the message being delivered to us.  If we start at the first earthquake of the eight, The sentence would read:  “He called to speak to the people of Israel declaring the days of the annihilation of Esther at PURIM to speak to the leaders and judges at the 27th Day of the Counting of the Omer (when Yeshua was teaching on the earth as He ascends on the 40th day of Counting of Omer.)  It is Yeshua’s Torah teachings that are to be given to the priests of the world through Israel as God has spoken to them in their ancient paths of Abraham and then Mosche.  But as they are in the dessert and ready to cross with twenty-to-forty year-old men numbering 601,750 it is two days before the Ruach HaChodesh arrives on the 50th Day of the Counting of the Omer.  Soon, the leaders and soldiers will be filled with the Holy Spirit to win Adonai’s battle of bringing in The Kingdom…as evil is purged.  Just as Noah was 601 years old when he stepped off the ark and began again, we see 601,750 men stepping onto new soil after not just forty years in the desert being trained in Torah, but it is 400 years from when Abraham was given the promise that they would come in.

Our Creator is reminding us of wars that must be fought, but we will do as the Jews did at the time of Esther.  They will come out of hiding and make known to the world, The Torah.  It is important to know you are saved in Yeshua/Jesus…and it is just as important in knowing how to ‘walk out’ your life in ‘God’s instructions’ known as Torah.

This is not made up by me…but a direct message from our Creator as it is His hand that put these earthquakes on these days that held this history.  It is for us to walk out our calling in Him…if we LOVE Jesus/Yeshua we will walk like He did…in Torah…never violating it…and since we try not to violate it…as He is the only one perfect…it shows us that we are trying to be LIKE Him.  He picks us up and brings forth the teachings of the fathers to encourage us as we see them fail…and yet mankind has always RETURNED to what they knew….The Torah. 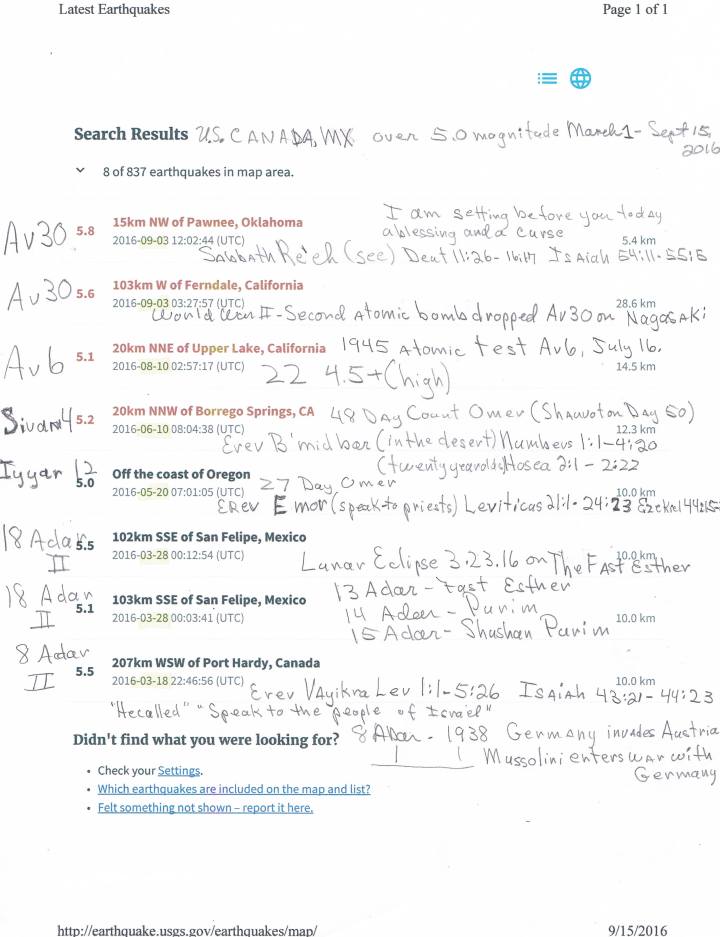