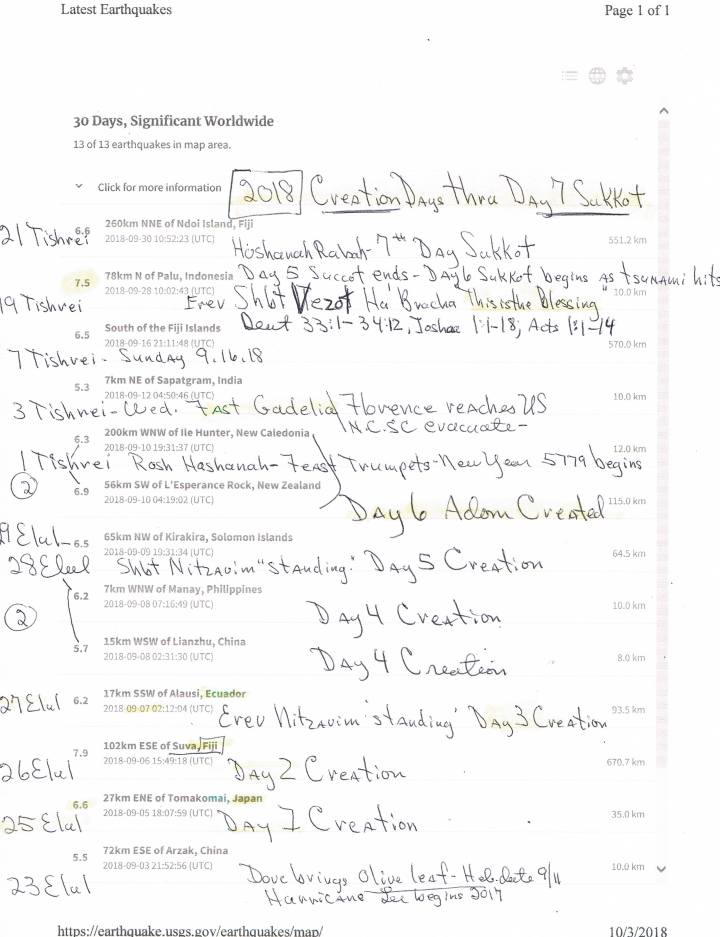 The Hand of God revealed His trumpets being sounded – Creation Days through Sukkot 2018.

What happened in the short time span of the last thirty days?  It brought to our house a sister-in-law fleeing Hurricane Florence.  The warnings to flee where heightened on Creation Day One, 25 Elul, Wednesday…September 5, 2018.  It was a two-day drive for this 80-year old poor single woman in her 1998 Buick.  New rotors and brake pads had to be installed before she could leave…her little amount of savings was used….but leave she did.  She arrived as The Sabbath began on Friday evening, September 7, 27 Elul.  I knew it also as, Creation Day Three.  What happened on Day 3 of Creation?

Day One – The earth was a void.  Creating Night and creating Day was the first day.  Genesis 1:1-5

Day Two –  God made the expanse and it separated the waters from above and below it.  The expanse of the Sky was made on Day Two.

Day Three – The water below the sky was gathered into one place so the dry land called Earth could appear.   Vegetation sprouted each after it’s own seed.

Creation Day One 2018 – September 5 – Japan Tomoakomai 6.6 earthquake at 18:07:59 UTC time.  Six is the vav represented by a staff.  God connected man to the earth to guard over it.  The staff shakes as an earthquake shakes the earth when men NOT in correct worship.   It felt like Moses dropping his staff into the earth and it split open.

Seven is the letter Zayin…a weapon..striving/forged to bring to rest by sifting.  The plants would grow and stand upon the earth in witness that God would supply every need.  It is also in this Torah reading that Moses stood before the people telling this new generation of children the stories of their past.

Their parents had all died in the last forty years because of their false thinking.  They thought God could not overcome their giants.  Moses had spent forty years growing up a new generation in the ‘wilderness.’  Moses was in full health at age 120 but would decrease so Joshua could increase in the same instructions…but on different soil.

Adam and Chanoah were placed on different soil…same earth..different soil.  We will be on the same earth but on a renewed soil.  Yeshua died and placed into the earth…but He changed the earth that set the ‘captives’ free…in the earth and within us…His blood atoned for our sins.

Will it be in that 120th Jubilee of the earth that we in full health will witness Joshua (Yeshua) taking charge and bringing us into our renewed earth?  (I believe we are very very close….50 years x 120 jubilees is year 6000.)  The Hebrew calendar just changed to the year 5779.  Are we 21 years away?  Benjamin was born to Rachel at year 21 of Jacob being with Laban.

Day Three at dusk began Moses convocation of exhorting the children on how to live on the earth once they crossed over the Jordan.  They were NOT to live according to the ways of the Gentiles….but The Torah would be placed in their hearts for them to do…which pointed to The Messiach to come.  They would be like Abraham believing the Savior would come…and He did.  Now, we look back to these great stories and to the Mt. of Olive even represented as God gave the Dove an olive leaf representing the land of come (Israel).

The USGS chose these earthquakes as the most significant earthquakes in the last 30 days.  The last thirty days held The Day of Creation, Rosh Hoshanna, Yom Kippur and Feast of Tabernacles.  And we must add in hurricanes and other disasters as Creation cries out in different forms…all designed to PUT fear in man.  When we thumb our nose at God….we are an arrogant people.  When South Carolina put up a sign…Pray to God for us…..the storm bated.  Do we recognize God in it…or do we just think coincidence?

Rosh Hoshanna was recognized by TWO earthquakes….New Caledonia and New Zealand hosted them at 6.3 and 6.9….Day Six….The Day Adam was Created.  WOW!

The next special day was The Fast of Gedalia….the Jews set up this fast so they would always remember NOT to remove leaders that God put in place.  Here we are threatened our President and policy makers….that God put in place….and we print T-shirts that show a pink tie hanging our very own President Trump.  WOW…..good has turned evil and evil has turned to look as good………………..  HURRICANE FLORENCE activated in full force this day and was no longer a MAYBE situation…………people were fleeing….hotels discounting rates to help those in need…electric companies not keeping up with demand…and 42 dying…all at The Fast of Gedalia……….The Fast of Trump is what is could be called.

19 Tishrei is Day 5 of Sukkot.  Beautiful weather all across America…with only 1/8″ rain in Missouri and no wind on our tent that sat near Lake Paradise that week.  Powerful message though to the foreigner…as 1432 are confirmed dead from the double catastrophe of a 7.9 earthquake and tsunami.   A tsunami warning was given…and then God removed it…and they don’t know why….the buoys weren’t seen in the right places?  The False Worship is over for that many people….judgment fell.  They had been praying to the wrong gods.  Unfortunately 34 children being taught The Bible were also lost…the innocent will leave with the tares…but their souls are what was saved.  To what God were they being taught to pray?  Innocent blood of our Savior saved their innocent blood as they accepted Him as the true living God.

Children are on loan to us…it is our job to protect their eternal souls from false worship.  We are today’s Moses and Joshua.  We should be in full health at 80 and 120 years old if we have His spirit in us.  Our earth will be restored to full health.  There is HOPE for those that understand the ways of God.